I am the widening participation, outreach and engagement officer for the Department of Mathematical Sciences at the University of Bath. I am also a registered STEM (Science, Technology, Engineering and Mathematics) ambassador.

Like many researchers involved with engagement I engage because I think justifying and sharing my work is an important part of my job. I also have a strong belief that it is important to encourage people from all backgrounds to undertake post-18 study (especially in mathematics).

Below you can find some of my engagement and outreach activities.

Here are a series of videos I made recently revolving around the Galton Board. We tackle the origins of the normal distribution, regression to the mean and Pascal’s triangle and show how we are related to this wonderful machine.

“The Maths of Life and Death” Pint of Science Talk 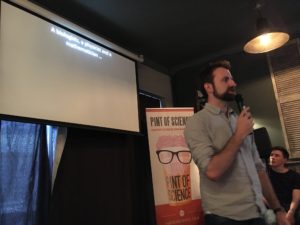 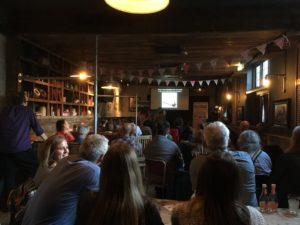 Below is a video of me promoting my talk for Pint of Science Bath in May 2018.

“The Maths of Life” TEDx talk

Research in the wider media

I recently had my research into locust migration and animal pigmentation patterning covered in the national/international media.

I went on BBC radio 4’s Today programme and chatted to John Humphrys about our work demonstrating that locusts must interact with at least two neighbours simultaneously.

Reuters also covered the work in a video piece and I was interviewed for RTE – Ireland’s national broadcaster and the BBC world service amongst others.

You can read my piece about this research on the Conversation website.

Our work on animal pigmentation patterns was published in Nature Communications. A wide range of media outlets ran with the story including Reuters, the Guardian, the Telegraph, the Daily Mail, The Mirror and many others. Reuters also covered our work. You can watch the video below.

I also did interviews on BBC radio Somerset and BBC radio Wiltshire.

You can read my piece about this research on the Conversation website.

You can also hear me talking to Ali Vowles and Jean on BBC radio Bristol about the project here or with accompanying video here:

I write articles both about my research and about the applications of mathematics to the real world more generally for The Conversation. My articles have been read over half a million times and reposted by a variety of international news agencies.

How many locusts does it take to start a biblical plague? Just three

How the cat got its coat (and other furry tails)

A video I recorded about the above articles.

Alan Turing: visionary,war hero and the only choice for the £50 note

Ignite talks on “What is Mathematical Biology?”

I recently gave a couple of Ignite talks about my research and my subject area more generally. You can watch one of them here:

I recently recorded a podcast about my research in Mathematical Biology and the wider subject area, starting with Alan Turing’s brilliant insight into potential mechanisms for pattern formation. I was recently profiled for the podcast Pythagoras’s Trousers, talking about my research as a mathematical biologist and the field as a whole. You can listen to it below. I kick in at about 7:45.

I recently appeared on Watchdog to talk about the maths of Mortgages. As part of the launch of a series of books called “Everything is Mathematical” I teamed up with the Times to set a couple of maths problems inspired by real world situations.
The question for my first teaser, about polytunnels, is below:

The solution is here:

The question for my second teaser, about drinking champagne, can watched below:

and the solution is here:

I was one of the chief mathematical consultants for all three series of the innovative comedy/maths fusion programme Dara O’Briain’s Scool of Hard Sums.

As part of the role, I came up with the questions set to Dara and the guest comedians on the show.
I also help devise the Homework questions and was in charge of the development of the Quiz of Hard Sums.
Come and have a go if you think you’re smart enough!
I was also in charge of setting the problems for the advertising campaign which appeared on the radio, on billboards and in the national press.

I recently appeared on the BBC’s flagship science programme Bang Goes the Theory with Dr Yan Wong discussing properties of a special set of curves called the conic sections.

You can watch the whole piece on the BBC website here.

These curves are the shapes made by the rim of a cone when you cut it (see figure below). They have all sorts of practical applications, but I’ll let you watch the video to find out. The conic sections, curves in green, are the curves you get when you slice through a cone. They are called (1) the parabola, (2) the ellipse (of which a circle is a special case) and (3) the hyperbola.

I work with the Oxford University Simonyi Professor for the Public Understanding of Science, Marcus Du Sautoy as part of his ‘Mathemagicians‘ group (M3). We run workshops, activities and give talks about maths to a wide range of audiences.
As part of this group I have had the opportunity to give several high-profile popular maths talks:

I am a registered STEM (Science, Technology, Engineering and Mathematics) ambassador. As part of this excellent scheme I do out-reach events in schools, museums and a variety of other interesting places:

I have run a number of events at the Natural History Museum in Oxford as part of the WOW!HOW! event. Usually I demonstrate demonstrated Bernoulli’s principle, that faster moving air has a lower pressure. This has some important results; from keeping planes in the air (air moves faster over the top of the wing and slower underneath creating a “lift force”. I use a really simple demonstration using a household drinking straw and a polystyrene ball (see the picture below). From April 2010-January 2011 I was a sub-editor on the Oxford University science magazine, Bang! I edit several articles for each issue and write a few as well.

I created some funny maths pictures for a competition for a few years ago. Whilst I designed these they are not all my original ideas. Please feel to use any of them if you can make use of them. Let me know if you use them for anything interesting. Author and Mathematical Biologist at the University of Bath. My book The Math(s) of Life and Death is out on the 5th of Sep/7th Jan (US) https://t.co/akepfNo71J

Why is the @BBC giving coverage to sort of bullshit as if it’s science. Where is the skepticism? Why is the BBC providing a platform for this sort of hocus pocus. It really gets on my nerves.https://www.bbc.co.uk/programmes/p084rnk5
#MercuryRetrograde

Katherine Johnson was a badass mathematician to the very end, waiting until age 101 so she would die in her prime

Today has been a great day for coincidences for me. At @GoogleUK I bumped into a friend from primary school. Then waiting for the train I got to chat with my wife’s best friends husband. Finally on the train I saw this woman who I stood behind on the escalator this morning.

We're really excited to see our #MEIConf2020 plenary speakers: @Kit_Yates_Maths, @d_spiegel and Sue Hough of @RealisticMaths. Find out which of them will be talking about the #Maths of Life and Death on our website: http://conference.mei.org.uk/plenary.php

Super excited to be heading down to London to give a talk @GoogleUK on the maths of life and death. Obviously I’m excited about the talk, but I’ve heard the lunch is amazing too. https://amzn.to/2MkmdcM @Google