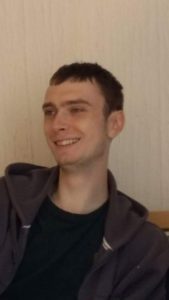 Cameron is a current third year student on the statistical applied mathematics doctoral training centre at the University of Bath (SAMBa).  In his first year, he obtained an MRes degree, and is now working on his PhD project, titled “developing hybrid frameworks for modelling reaction-diffusion systems”.

He completed an MMath, again at the University of Bath, where his passion for applied mathematics, and more specifically the field of mathematical biology, grew. His great belief is that mathematics should not be for the few that can understand complex theorems, but rather should be used as a tool to further the development of technologies that can be used to aid humanity and the wider world.

He has undertaken several projects whilst completing his undergraduate degree. A summer project funded by the Bath Institute for Mathematical Innovation (Bath IMI) was concerned with applying PID control, typically used in an engineering setting, to the spread of an infectious disease, and how this control method can better inform choices with regard prevention. His final year MMath project investigated hybrid methods for simulating diffusion on uniformly growing domains, which importantly for him, introduced the inherent randomness of biology and nature through stochasticity. This theme has continued into his PhD, where general reaction-diffusion systems have become the centre of his investigation, together with the interrogation of specific systems seen in biology.

THREAD on cases in the UK:

TLDR things going in right direction overall but some areas of concern for deprived communities & in schools. 1/19

This thread is a nice deconstruction of Carl Heneghan’s latest misleading piece in the Spectator.

Carl Heneghan's latest article for the @spectator shows the professor of Evidence Based Medicine is either misreading or misrepresenting the evidence.

People of Britain, this is your regular reminder that confident statements that 'herd immunity' has been attained should be treated with caution - especially when reported in newspapers before even a preprint has seen the light of day.

"Whilst there is an argument down the line for having travel certification, the majority of countries are nowhere near where they should be in terms of vaccine access. So that will end up widening inequality in terms of travel and access if we put that in place now." @DrTolullah

Today's @ONS infection survey update shows more variation across the UK, with a marked decrease in Wales being the stand-out point.